Welcome to my site, focused on travel experiences across the world. From foodie hotspots to wilderness getaways, this site celebrates the culture, sights, sounds and experiences the world has to offer, with a few quirky detours along the way.

UK: Pies and Piers in Portsmouth

English coastal towns are different from many. They just don’t have the weather for it. But with a cold wind whipping through clothing layered on, the salty tang in the Portsmouth air still evokes childhood memories, making me remember bone-achingly chilly dips in the ocean in early summer and sandwiches on the beach, crunchy with a fine coating of sand. And that was in Australia. I wouldn't recommend dipping your toes in the freezing water here but despite it's compact size – only around 14 square miles – Portsmouth has more going for it than the deep, dark, slightly ominous Solent.

Why is Portsmouth different?

Portsmouth has the distinction of being the United Kingdom’s only island city, positioned on Portsea Island, where the Solent strait joins the English Channel. Naturally, that means it has a rich nautical history.

On a clear day, the Isle of Wight is visible. It's accessed from here, with hovercrafts transporting chattering group of tourists to the island. There's enough to Portsmouth, though, that they could just as well stay here and explore.

It was no surprise when Emirates sponsored the Spinnaker Tower and it took on the name - it looks a lot like the iconic Burj Al Arab. Shaped like a sail billowing in the wind, the tower is the centrepiece of a harbour redevelopment project that has revitalised Gunwharf Quays, converting it into a trendy area tightly packed with retail outlets, restaurants and bars.

The Emirates Spinnaker Tower has no useful function apart from attracting tourists; it is purely an observation tower. It stands at a height of 560 feet (170 metres), making it one of the tallest accessible structures in the United Kingdom outside London. The three observation decks are at the top of the tower, providing a 360° view of the city, the Langstone and Portsmouth harbours, and on a clear day, a viewing distance of 23 miles (37 kilometres). The highest of the three observation platforms, the Sky Deck, has a wire mesh roof, so expect to be buffeted by wind here. If you happen to suffer from vertigo, you may want to give the glass floor on the first viewing deck a miss, but if you're good with heights, step on and check out the view.

While you're in the neighbourhood, pop in for a bite at Las Iguanas – it's a chain restaurant, as with most of the outlets around the tower, but the food is an interesting fusion of flavours from Brazil, Mexico and beyond, cooked from scratch.

Walking around the harbour, there is a bronze statue depicting a mudlark in front of the majestic HMS Warrior, Britain’s first iron-hulled warship. In olden times, children in Portsmouth would wade into the mudflats and entreat passers-by to throw coins. As the seagulls caw, it feels as if the breeze carries the voices of long ago.

Further around, the still-operating naval base is home to the oldest dry dock in the world and the Portsmouth Historic Dockyard, where naval history is brought to life. Even for non-naval buffs, the dockyard is interesting, and impressively hands on. The ticket gives entry to several historic ships, including Vice-Admiral Lord Nelson’s world famous flagship, HMS Victory, Queen Victoria’s HMS Warrior and the only surviving ship from the First World War’s Gallipoli campaign, HMS M.33. You can also catch the waterbus to Gosport and explore a Cold War submarine: HMS Alliance.

If you're not all boated out, the Mary Rose Museum is in the same area. The Mary Rose was a ship in Henry VIII’s navy, which he had built when he came to the throne in 1509. She was launched in 1511 and fought in two wars against France and one against Scotland, before meeting her fate in 1545. The Mary Rose was part of a defensive fleet when a large French armada attacked the Isle of Wight, with the intent of invading England via Portsmouth. The Mary Rose managed to capsize, taking her crew of around 500 to the bottom of the sea a couple of miles from the coast of Portsmouth.

The ship may be know for sinking, but she's more famous for the salvage operation in 1982, when she was returned to the surface on live television – an event watched by around 60 million people worldwide.

Sitting on the southern point of Portsmouth island, Southsea Castle is less a ramparts-and-drawbridge attraction, and more a stolid fort, squatting on a hill, spying on incoming cruise ships, back when that was a thing. It's free entry between March and October each year, so it's worth popping in and climbing to the top of the Keep if you want another panoramic view.

Note the sea forts stuck out in the Solent, built as a result of the 1859 Royal Commission. The one directly out from the castle, Spitbank Fort, is now a luxury island retreat with nine bedroom suites that is only available as a private. exclusive-use hire. As an aside, Horse Sand is a living museum, and No Man's Fort is also a hotel and events venue, all three owned by the same company. Spitbank can sleep up to 18 guests, but they'll all need to be reasonably well-off, as 24-hour packages start at £6,280 if it re-opens to the public post-Covid.

It's a pleasant stroll along the pebble beach from the castle and there is a plethora of flat stones perfect for skimming over the water between waves, but the real reason to head this way is the South Parade Pier. The history of the pier is eventful – it was partly dismantled during the Second World War to hinder invasion and has caught fire several times, including during filming of the 1970s rock opera Tommy.

The pier retains a sense of faded grandeur, a photographer’s delight against its ocean backdrop, as the sun sinks under its pylons. It definitely feels like it's been lifted from a bygone era.

There are plenty of food options in Portsmouth, but if you're looking for something a little bit different, Pie & Vinyl is it. This eclectic combination of a record store matched with one of England’s favourite comfort foods, the pie, shouldn't work, but it does. I swear a Pieminister Moo pie made of British beef steak and fresh herbs in rich gravy with creamy mash, and minty mushy peas offers curative benefits. Or is that the fresh sea air? 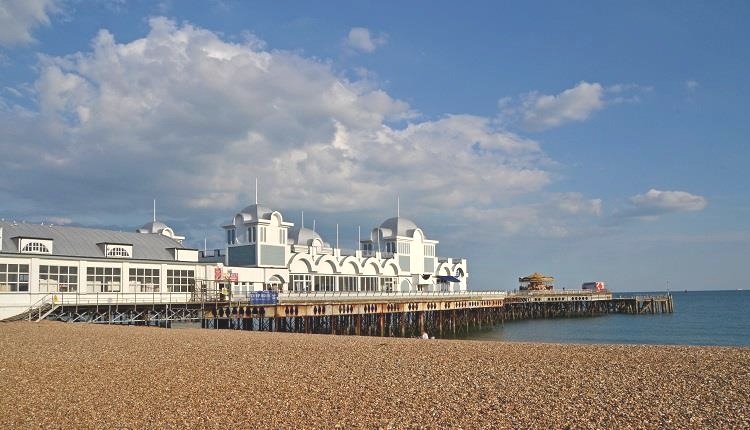 UK: Exploring the Forest of Dean